the return of random

Its been a while since I did random so here goes.

1) I've got more small works in the, um, works. (Wow, outstanding writing skills we've got there, huh?) Here they are: 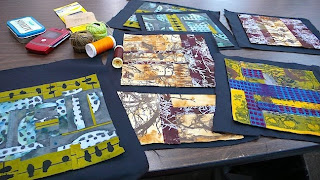 I've only got one so far of the yellow/blue purple one of the far right. I did a second one and then decided I should cut up and reassemble it to make it flow better but it had different ideas. Once it was sliced, it refused to come back together. No big loss, they will become freebie pieces. The ones that played nice will make an appearance in my etsy shop after they are attached to canvas.


2) I attended the Brighton Modern Quilters Guild tonight and took the above work as my show and tell. I sputtered and stuttered and pretty much bumbled my way through it (I sometimes get tongue tied in new groups). Luckily its a very nice group of women and Andrea, the lovely owner of Monarch Quilts where the meeting was held, didn't look at me like I had three heads so maybe I didn't do as bad as I thought. At any rate, I had a good time and will be going back.


3) I tried to get Dooley love to be a yarn model but I don't think he was digging it: 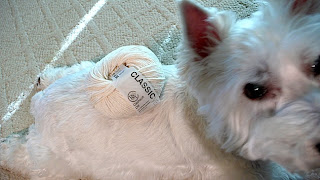 4) This white hunk of plastic is making me stupid happy: 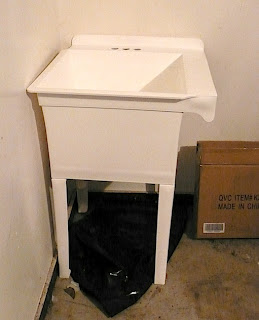 That is a laundry sink that will soon be hooked up to pipes. Its in the garage so that means I can dye fabric and screen print at will. Its just in the nick of time too, since its dye weather here in Michigan. Of course, it won't remain white for very long. I can't wait to mess it up.


5) I bought this magazine for two reason. (a) I adore bizarre plushies and (b) one of the features on the front says "scary but sweet zombie chickens." Need I say more? 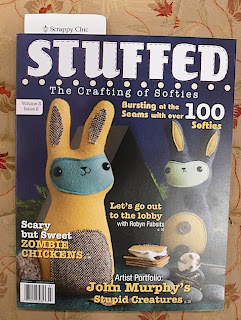 6) I need to turn this heap of stuff into seven assemblages in a couple of short months: 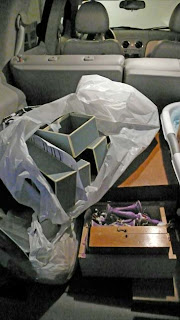 Leann and Joan and I are putting on a three woman show at the local coffee house in downtown Plymouth. Leann has been lamenting that she is freaked about the amount of work and I've been looking at her like she's a bit nuts. I mean, what's the big deal? There's plenty of...oh wait, this is the end of June already. Ruh-roh...why didn't anyone tell me that??


7) Creating massive amounts of artwork may not be as unreasonable as I am worried about. See this? 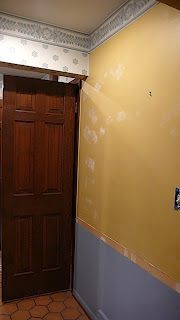 This is the beginning of a very long process. Much of this house has wallpaper on it. Everywhere. In every room. All the way up the staircase to the super tall ceiling. Everywhere. (I've never seen anything like it really.)

The decision has been made that the majority of it needs to go away and be replaced with fresh clean neutral colors. It will be fantastic when it is done but it does mean being displaced from several areas of the house. My studio is not being touched so I see myself fleeing the chaos to it while this is happening. Hopefully that equals concentrated work time.


That's all I've got. The lightning bugs were out when I got home from the meeting tonight. They remind me of fireworks but without all the smoke and noise. I stood there for a moment and let them flitter around me, didn't even squeak when one landed on me. Imagine that...
Posted by Fibra Artysta at 10:24 PM

Quit looking at the fireflies and get inside and start freaking about all the assemblages we need to make!!