The Great Studio Purge of 2013 - the aftermath


When I decided earlier this year that it was time to suck it up and deal with the things in my Warehouse and Studio, I had only an inkling of what I would learn during the process.

I figured I would just get rid of stuff and have some clear space and that would be that. But I've spent the past two days with a professional organizer and inside my head and turns out, there's a lot more to it then just having a lot of stuff.

I want to share with you everything that I've learned. I know there is more work to be done but there's a lot of stuff that got done that I'm hoping might be helpful to you if you are also struggling with the same things I am.

Over the next several days, starting tomorrow, I'm going to do a series of six posts, each one dealing with a single topic. Because there's just too much to write about in a single post.

I can tell you two things now:

1. I am apparently concerned that ziploc bags, sharpie markers and safety pins will no longer be made because I have enough to equip every household in Michigan.

2. I am nothing if not consistent and I prove that by the fact that I have purchased the same book four times.

For today I'd like to show you the before and after photos of each room. 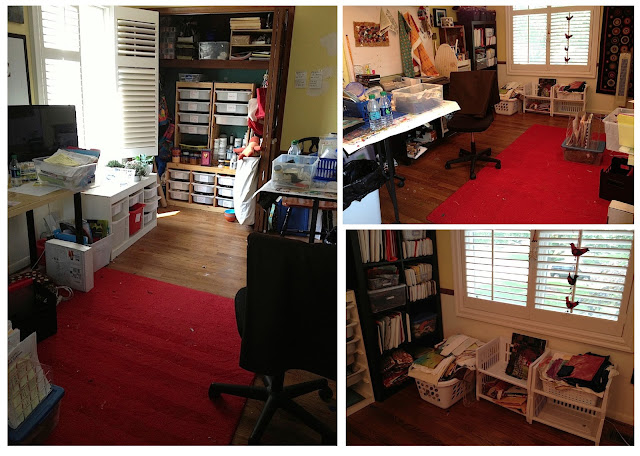 The posts over the next six days will show more specific photos to deal with their individual topics.

i join you in 2 of your 3 collections. I don't have the safety pin concerns, but the other 2 I can probably match you item for item. My third is pencils, mechanical, non-mechanical, different hardness of lead, different size pencil... I have a WHOLE BOX 16" by 14" by 7" filled. I never need to buy another pencil in my life or the life of my descendants. I even have a list on my phone of things I never should buy again to remind myself.

Wow! I bet the feeling of relief and lightness is heady. I know how I feel when I make that kind of progress. I'm eagerly awaiting your next posts to see what you have learned as we can never stop learning!

I will be interested to see how this affects your process...I am a messy studio person and I find I am somewhat stymied by too much tidiness.....I hate to start a new project for fear I will mess everything up! That said, I do need to do some purging and reorganizing. I have a list of tasks and will do one thing each day so it isn't too overwhelming. Not sure if I am brave enough to post pictures of my mess online, though! Very courageous of you!

That is some serious work that has been done! Great job!!! It looks beautiful!!! I'm looking forward to the next week of posts. :D

So impressive. Floor space is really opened up now, and all looks so tidy. Look forward to your insights.

Wow what a lot of work that has been done but you must be proud of yourself. Creativity has nothing to do with being messy or neat, that's a mindset. But having a neat studio does allow you to find more "stuff" to create with, and knowing where "stuff" i,s thus giving you more time to create and less time having to look for "stuff" and not finding it. :) Great job!

Looking forward to the posts. I've only bought one book twice but am certain that there are some items of which I have way too many. One of .my issues is shat do I really want to do and get rid of what doesn't fit. That's scary since much if what I would like to get rid of adds to the family income and not certain that what I would prefer to do will compensate for the lost income.

Well done! Oh! you give me hope that sanity and an uncluttered look can in fact become my reality as well!

The rooms look great! A lot of hard work for you - but the results are worth it.

As i said before
...it is great of you to share this with us. I am still looking at my room ans trying to decide where to start. Do you realize how many of us you will inspire!

Can't wait to read your posts! Thanks for the inspiration.

WOW!!!
One super impressive accomplishment...I hope it rubs off on me.

Wowza!!! I hope you have poured yourself a large liquid refreshment to celebrate. You did a lot of hard work. Having attempted this myself, I know that it isn't just physical work. A lot of mental exercising about what to keep, where to put it, how do you work, etc., goes into the process as well. Proud of you, Lynn. Now, I wonder if the organizer would travel?

Wow. If you're like me, then you must be walking into your warehouse a lot now just to keep on admiring the work you've done. You can sit on the floor in the middle of it and chant OHM.

What a lot of progress in a short period of time. And a whole lot of work to get to this point. Great job and I will look forward to the following posts.

I purged and organized a year ago. I work differently now and I am so happy not to look for the 15 pairs of scissors or 10 rotary cutters I have in my studio cuz they go back in the same place every night. Not to say the fabric doesn't need the same purging now too...

You are a brave girl to share- thank you.

Dude. Just.....du-u-u-u-ude. So glad we tackled this same job at roughly the same time (for the same reason). It's been a freeing experience and while I will most likely miss a lot of the magazines & books (which was terrifically hard not to start squirreling back into my workroom...), I found it helped the sting to donate these to teachers who will use them in local community art classes. It has been such a wonder to be able to walk into, through, and find a chair in my workroom/studio that everyone in the house (all pets included) keep traipsing in at all hours, just because they CAN. Which is simultaneously annoying and thrilling at the same time. Now if I could just keep the kitten from stashing all his toys in my organized storage bins...

Thank you for shareing. Motivating. Vivian

And again, you are an inspiration! Just WOW!
So do you love the new spaces? :)

hats off Lady!! nice job and the space is wonderful - you are going to link this up on my Sew places - studio spaces on my blog aren't you?? its an inspiration!

Very inspiring series - wasn't sure where to leave my comment - I took something from each of the posts!

Hi Lynn.. you are so very focused on other things like your beautiful new book and teaching... Thermofax screens for all of us and more. I salute your creativity and celebrate the studio cleaning commitment. RELAX.. have some fun!
Bethany in Kingston, ON