Drink Coffee, Make Art - will you take the pledge? 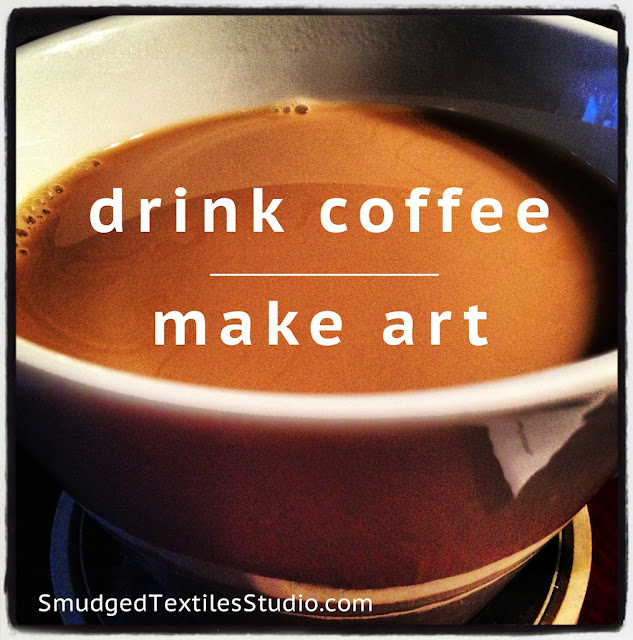 You all know I'm a coffee obsessed artist. Love it. I make my own at home and I also have my favorite coffee shops that I like to visit to get a fancy coffee or a brew that they specialize in. It's been on my mind for a while that I wanted to do art specifically about my beloved coffee and I've finally found the perfect reason to do it.

I'm one of the artists that has been juried into a special exhibit for Studio Art Quilt Associates called "Earth Stories". The exhibit features artwork that highlights issues that are hurting the earth and the people/organizations that are working to help eliminate the problem.

I spent a lot of time looking around at causes. There are so many to choose from. It was pretty overwhelming to be honest. I started to feel really really small and like even if I highlighted a really great organization, it just wouldn't be...enough. I started to feel as if I needed something that I could play a part in. No small order.

I read a lot about what kind of trash is in a landfill during my research. (Pretty gross, don't recommend it.) And when I came across this statistic, I felt a pull:

"Paper and cardboard make up over 40% of the solid waste buried in North American landfills. Of that 40%, a disproportionate amount is attributable to disposable coffee cups. Unlike newspaper and cardboard boxes, disposable paper cups are not recyclable. The thin lining that makes a paper cup waterproof also keeps it from being recycled. All of those cups end up in our nation’s landfills."

I had NO idea. I drink from paper disposable coffee cups all of the time and think nothing of it, always assuming that they could break down easily because they're paper, not sytrofoam. I was surprised to know that I'm playing a part in that horrible 40% statistic.

It clicked then that while this may seem like an insignificant thing to make a piece of art about when you compare it to other environmental issues, it's one that I personally can make a change in. It's something that takes so little effort and can effect such an incredible change.

That makes it important.

So instead of trying to find a cause to highlight in my art quilt, I thought it would be cool to start an awareness project. Mainly because I had no idea what I was contributing to with such a simple action of throwing a paper cup in the trash. And by not doing that, if many of us didn't do that, there'd be a difference in the amount of waste going into landfills.

I'm looking for artists who are willing to take the pledge with me to reduce or eliminate drinking from disposable coffee cups. I'd like to include a mini study with my art quilt because we are including sketch books to travel with the work.

If you are an artist and you drink coffee or tea (have heard from the tea drinkers that they'd like to be included too) from disposable cups and would like to help me out, here's what I'm looking for:

I'll send you a tracking form that will tally how many disposable cups you drink from over the course of four weeks. In week one, I ask that you don't change your habits at all and just see how many cups you're using. And then over the next three weeks, make an effort to reduce or eliminate paper cups completely - meaning drinking from a reusable cup. (This applies to styrofoam cups too, anything that is disposable.)

I've had some people tell me that they don't think they'd be a good drinker to follow because they only occassionally drink from disposable cups. But I disagree. Every cup that doesn't go into the landfill matters. So if you only drink from two disposable cups per week and stopped that, that's eight cups a month that wouldn't go to the landfill. Multiply that by thousands of people and THAT MATTERS.

At the end of four weeks, send me your information and I'll figure out how much waste we kept out of the landfills!

I'd like to compile the results into a record to travel with the quilt. So I'll also be asking that I can include your name and state. If you are interested, please send me an email at FibraArtysta@earthlink.net and I'll send you the forms.

Thanks for joining me in making a difference! :)

Lynn, I'm one of those weirdos that when I got to the coffee shop I ask for a mug because I'm going to be drinking it there. At Starbucks they take of 10 cents. I don't like drinking from paper or styrofoam. When I worked in an office (I have worked for a lot of my years in my home office) but when I did work out, I always had a mug on my desk. Sound like a great way of bringing awareness.

Lynn, I had coffee yesterday with Robbie at Panera, she had her coffee in a mug, mine was in paper. She told me about your project. I refill my paper cup before leaving and bring it home. I wash the cup out and reuse it. Eventually I'll put the plastic cover in the recycling and sometimes use the cups for other things like to scoop birdseed or flour etc. You have made me think about when I do discard them how I could do it more ecologically.

I love this idea, Lynn!
I MIGHT have a cup of tea in a disposable cup once a month... but armed with this information I will find another way!
Can't wait to see the completed project. I'm rooting from here. :)

Can't wait to get started..you are certainly bringing awareness to a major eco issue!

I very rarely "drink out" but in thinking about your post I believe I drink maybe 1 disposable cup every 2 months. Even though it is rare I will be sure to bring in my own mug!

The logo/profile pic I use is called "Self Indulgence" which is my ode to coffee! The hair and shirt is coffee bean fabric and the background is chocolate... my 2self-indulgences! I believe I have a lot of company!

Almost never use disposable cups. I make 2 quart thermoses of tea every morning & use a mug. Bring it to work, too. Now, if I could do something about my coworkers & their daily (or several times daily) cups full of soft drinks and/or drinks in plastic bottles....

I have reduced the number of disposable cups I use, but, when I rounded up the trash, I realized that I have been using 10-12 K-cups weekly. A bit of a surprise to me! I am going to get the reusable filter and fill my own, except for one or two favored coffees I drink rather rarely.

I don't drink coffee. But I made a piece years ago with a similar idea about water bottles. I stamped little water bottles over fish swimming in water fabric. Then, I actually sewed "plastic" onto the bottles. Here's the link if you want to see.
http://lisasartmusings.blogspot.com/2008/06/water-challenge.html