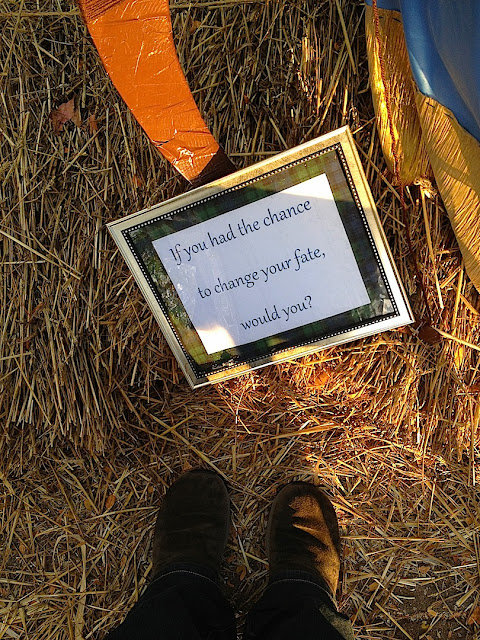 Would you step away from the determined into the unknown if you could?

What would you do? What new choices would you make?

How would life be different?


Where I Stand is an ongoing photo essay examining the different places I spend my life standing. Too often we take for granted the everyday places we spend our lives walking on. The ground we tread on has its own stories to tell.
Posted by Fibra Artysta at 9:09 AM 1 comment:

I finally joined Instagram (took me long enough, right?) If you don't know what it is or were like me and just sort of heard of it but not paid attention, its a photo app for mobile phones. What's cool about it is that you can add all kinds of filters that you can use to alter the feel and look of the picture.

So you go out into the world, snap photos with the app, share them on facebook and twitter and just generally become a photo taking addict that can't help yourself. (Awesome.)

I have one whole whopping photo up there but here's what I mean by filters: 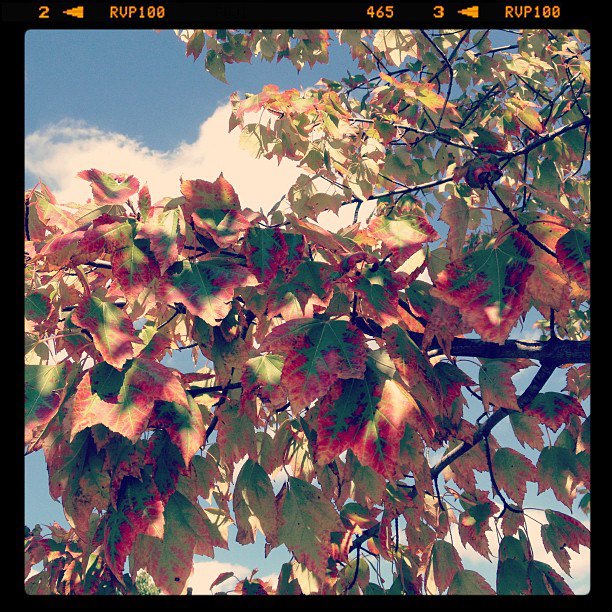 Made the picture look all vintagey and sort of worn out (it also added the black frame which makes it look like it was taken with film rather then digital). Love that.

My Instagram name is girllovespaint, in honor of all the paint flinging that I do in the studio. If you are already on there, please give me a follow and I'll do the same for you - see you on the flip side! :)


Posted by Fibra Artysta at 8:39 AM No comments:


My battle with my studio is no secret. In fact, it borders on epic. We have a somewhat uneasy relationship. We like each other but disagree over items such as how to lay out furniture and whether or not it should be responsible for cleaning up after itself. (I think it should. If people can shoot up into space, a self-cleaning studio does not seem like such an unreasonable thing.)

Watching HGTV doesn't help. Not in the least. I had a dream that these guys were renovating my studio. One was taking a sledgehammer to a wall and the other was neatly folding fabric.

But then I was watching Sarah's House and she did this: 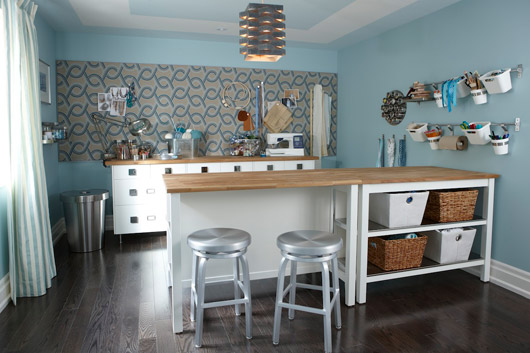 That there is a craft room using IKEA kitchen islands. IKEA kitchen...hmmm...my head about exploded. Genius!! I've been working hard to contain myself from completely tearing everything out of my studio and redoing the entire thing in handy dandy versatile IKEA kitchen cabinets.

I really can't right now, too many projects with firm deadlines. And honestly, my poor studio walls leave something to be desired. The whole room needs to be emptied and the walls repaired and a nice clean coat of paint needs to go up. (One that isn't the result of me accidentally stepping on a paint bottle and shooting a stream of bright orange acrylic across the room.)

My current plan of attack is to undertake the massive change next spring. Which isn't so far. But the itch to change something just wouldn't go away. And in my twitchy restlessness, I discovered this: 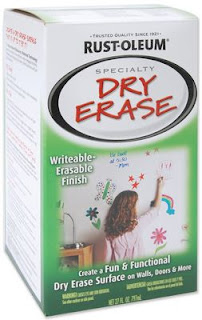 Score! I have a task list as long as me (I'm 5'1" so while for a human that is not so long, for a list that is mighty) and it would be nice to have a space to write it all out and get it out of my head.

Wall space is limited. At least, wall space that I can reach with my short arms. I decided to move my design wall which was half hidden by the door anyway to a different space and paint the dry erase board in that space. It'll be big for a writing space, only something not so great happened when I moved the design board: 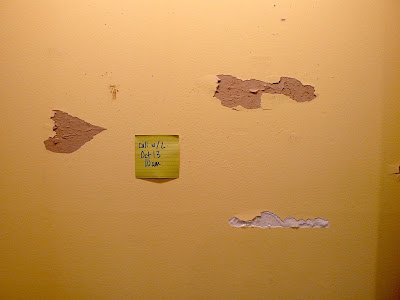 I took part of the drywall with it. Or at least the surface of it. And then I noticed all the teeny tiny little pin holes and remembered why I put the design wall there to begin with. (Reminders via post-its seems a logical interim solution.)

Spackle has been purchased and I plan to tackle the project next week. Its definitely going to be more involved then I originally thought but I think it will be worth it in the end.

And now that I can not only see but use my entire design board, I didn't waste any time filling it up with newly printed fabric: 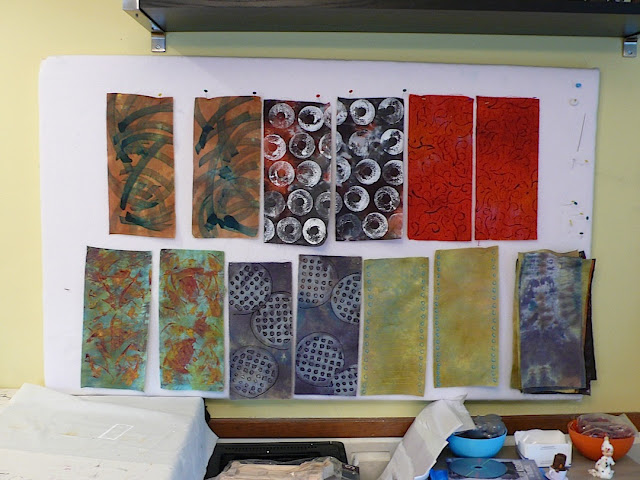 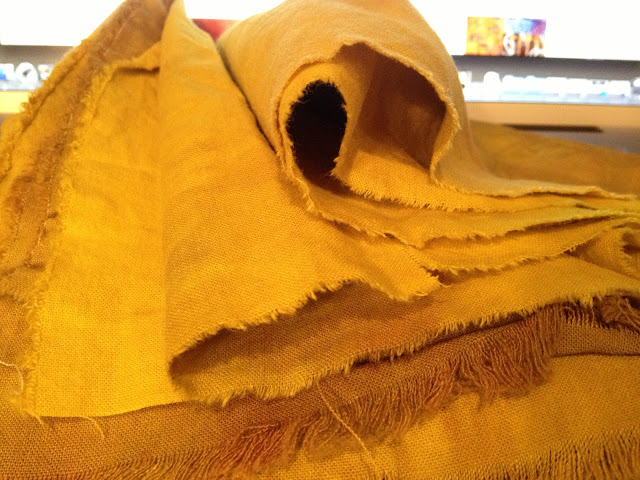 Cathy sent me that fabric for my birthday. She knows me well. I swooned when I saw it.

Its been lurking about my studio ever since and I just kind of keep walking by it and petting it. I have an idea for a series of heavily stitched art cloths and this is kind of like kismet, just begging me to begin. 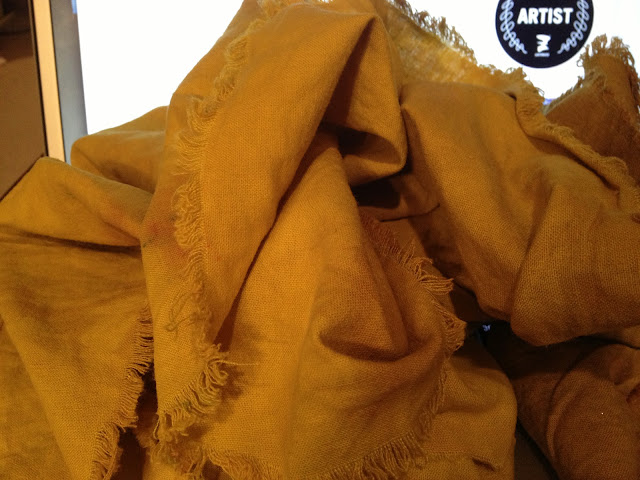 How can you not love that fraying and texture??

What makes this different is that its not my beloved kona cotton. I admit that once I find something I love I tend to stick to it like glue. And my choice of fabric is pretty much consistent that way. I like a good kona cotton - its got real presence since its a little thicker and it stands up to surface design like an absolute champ. I'm not so much of a silk fan, could never really warm up to it.

But that wonderful puddle of color up above is linen. And not only that, but upcycled clothing that Cathy dyed for another fabric.

I'm so inspired by the way it drapes, I want to take a needle and thread to it and just stitch on it until it begs for mercy.

What about you? Are you faithful to a particular aspect of your medium? 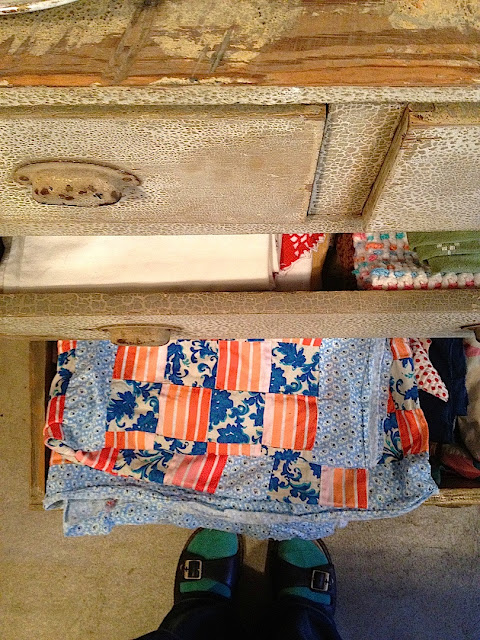 The antique sale is a regular feature to the autumn backdrop. I took my time this visit, sifting through the closed dresser drawers I normally sail past without a thought. I found textile after textile neatly stacked inside. I wondered at the woman who made them, if she ever thought her pieces would end up squirreled away like a secret. I thought of my own work, uncertain of their future after I am no longer around to care for them. The urgency to leave my mark on them looms larger then ever at the idea.

Where I Stand is an ongoing photo essay examining the different places I spend my life standing. Too often we take for granted the everyday places we spend our lives walking on. The ground we tread on has its own stories to tell.

an ending to begin again


Every year around this time I fall into what I call one of my quiet spells. Having passed the halfway mark of the year, I find myself needing solitude. A period when I can fold myself inward and simply allow myself to exist. I shed all but the most critical committments and spend time with myself.

The truth is, I can't make art if I don't feel connected to my thoughts. Its that basic for me. If I forget to take stock, to remember what imperfections and trials happened to make me who I am, I feel lost. 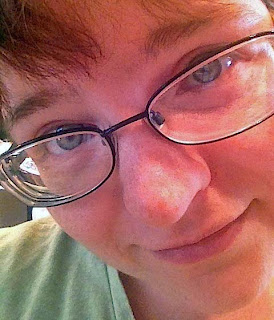 Falling into these spells always feels sudden somehow. But I know its not. The awareness of what is happening is slow to come but when I find myself standing in that blank space, I can see when I began to back down, began to give away obligation and have-to's.

I think as artists we feel like we must constantly produce produce produce. There sometimes feels like someone standing beside us keeping stock of our accomplishments, pointing out the new things to try and the only way to be everywhere at once is to run at full tilt all of the time.

But its okay to be quiet too. Its okay to sit with yourself, not make art, not reach beyond yourself and learn to listen what your mind really has to say.

I'm never sure what makes me want to step back into the race, to fill up the space again. Sometimes its an urgent deadline and other times its just a small passing of a thought. I suddenly remember the power of being Artist, that connection with my spirit that is heavy and mysterious and intoxicating.

The spell is passing, nearly gone. I let it go like saying goodbye to an old friend, I know it will be back again. And I know it shows up when I need it most, when I seem to have forgotten how to slow down and feel my art. I can see it again, I can reach for the paint and fabric without hesitation.

Its good to step way from the empty and back into the full.

no matter what medium


I don't care what medium you work in, this video gives voice to why we choose to be Artist.

And without a doubt, the best line to take away is this:

If you had been searching your whole life for something you loved and you found it, what would you be willing to sacrifice?
Posted by Fibra Artysta at 10:47 PM 4 comments: 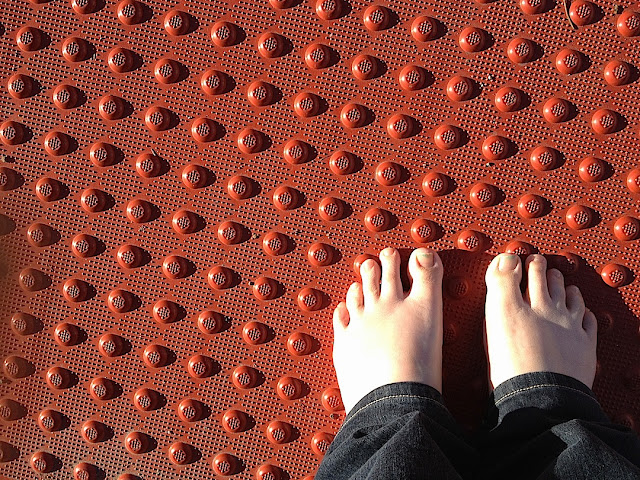 The sun hangs heavy now, the time for bare feet on the ground will soon be gone. I studied the sideways shadows and the raised bumps and had to feel them both against my skin. They pushed back hard against me, unimpressed by my presence. I find myself leaning into the struggling alliance of warm sunlight and cold air, happy for the return of the time of cold and clarity.


Where I Stand is an ongoing photo essay examining the different places I spend my life standing. Too often we take for granted the everyday places we spend our lives walking on. The ground we tread on has its own stories to tell.
Posted by Fibra Artysta at 9:45 AM 1 comment: 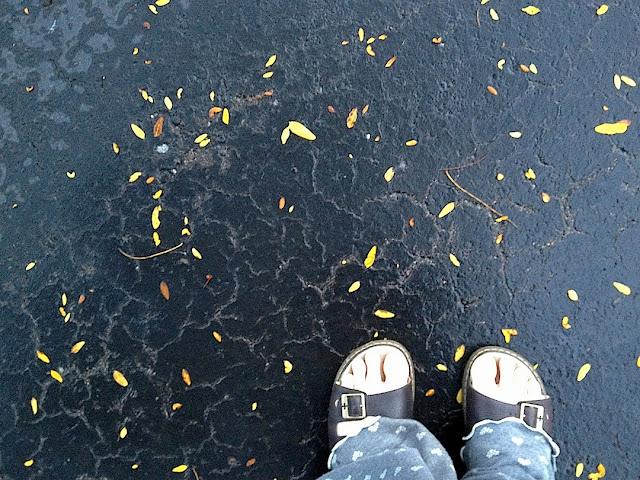 I stood in the early morning chill, with the sun slanting in from the right. The uneven light blurred the details of my toes and threw a blanket of bright shadow across the saturated pavement.  A wave of nostalgia pushed around me. Wet blacktop from a dawn rain, small yellow leaves. I remembered why I started the project, I remembered when I stood on the pinpoint of unbearable grief and was looking for a way to soothe the time I needed to spend there.

In that still moment of the beginning of the day, I realized I've lost sight of the small things. I've forgotten how to slow down and look. I've retrained myself to walk past the world and stand on it without regard or consideration. So I'll begin again, looking and writing and soaking in that tiny pause that weaves into a lifetime of experience.

Where I Stand is an ongoing photo essay examining the different places I spend my life standing. Too often we take for granted the everyday places we spend our lives walking on. The ground we tread on has its own stories to tell.
Posted by Fibra Artysta at 10:11 AM 4 comments: