I will admit that quite often when I'm working on pulling together an exhibit, I sometimes loose sight of it. By that I mean that I become so familiar with the work and see it on a daily basis that I become accustomed to it. Its not to say that I am not impressed with it, but I learn to look at it with the same pair of eyes and it becomes part of my surroundings.

So because of that, its always a thrill when the exhibit goes up and I see it in a brand new setting, and I see people who are laying eyes on it for the first time and its like I get to see it all over again new too.

Today Jackie, Mary and I hung the Breaking Traditions exhibit for the American Sewing Expo this weekend. (Truth be told, Jackie and Mary hung it while I directed since my back is still acting up and I'm not able to do much. They rock. Go check out Jackie's blog, she's got a cool entry about both exhibits as well.)

When I stepped back to see the exhibit, my breath caught. Here's why:

Click on the image to view a larger version of the picture.

That is a 20 foot wide by 8 feet high wall of artwork about positive things/people organizations. Its over $1,000 worth of funds for the American Cancer Society. Its a lot of hard work by a lot of talented artists and its absolutely breathtaking.

I've always been proud of the exhibits I curate but this one I am especially proud of. I'm really excited that it is going to travel. I think it will have a great impact on everyone who sees it.

Another exhibit that also went up for the expo today is From the Back of the Sock Drawer, a sock creature exhibit. Joan and Deb tackled this one and its an incredibly fun exhibit! Take a look and see what you think: 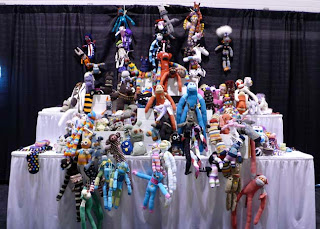 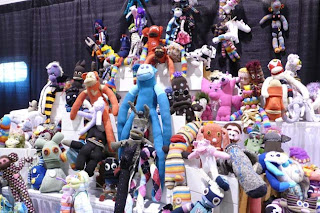 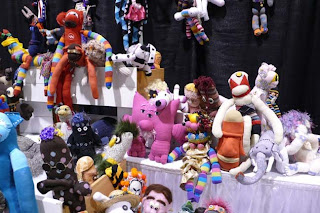 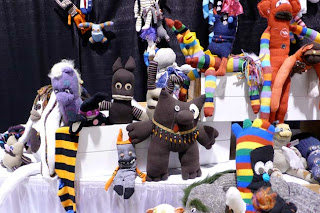 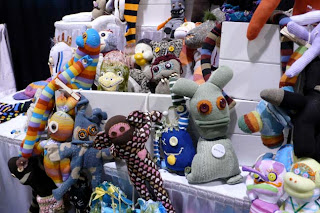 Talk about a gigantic pile of creativity. Its absolutely amazing, you could stand there in front of that exhibit for hours and you'd probably never run out of new things to catch your eye.

Its totally awesome and I count myself lucky to be among so many creative people.

I also got incredibly excited and giddy because with the installation shot of Breaking Traditions at the ASE, I could finish my website.

So I launched that today as well. Go check it out if you have a sec, there is some new work on there that hasn't had much exposure and my Where I Stand photo essay in its entirety.

Its been a good day.
Posted by Fibra Artysta at 6:03 PM

Wow, this is so impressive. It was fun to find my piece. Congrats on doing this.

Congratulations. These exhibits are amazing. I wish I could see the Breaking Traditions in person, it's mighty impressive. and I wish I could kidnap all of those sock creatures and take them on a trip around the world with a camera.

once again another excellent idea and display!