When it became clear that I was going to be making larger pieces for Ragged Layers, I started fretting over the photography side of it.  I do okay (meaning it can pass for a blog photo) shooting my small stuff. I can make it stay put on my design wall and clear up any color skews in photo shop.

But a 36" square? Well, that presented a huge issue.

And since I'm so enamored with the Remnants Collage series, I want good photos. Ones that represent this new body of work that I'm building. I asked a friend if she had any suggestions of who I could take my work to and she directed me to a local photographer, Eric Law.

Took me about a nano second to book an appointment with him. And after receiving back the first batch of photos, I know I'll be visiting him quite often.

This is Remnants Collage 15 when I took a shot of it in-progress. You may think that its leaning on the floor because I was too lazy to properly set up for a good photo, but the reality was going to be that I'd have to take the "good" photo that way too. You can see the effect of yellow lighting in my studio (which in all honesty, never really looks yellow to me until I see it in photos) and just the general obnoxiousness of how hard it was going to be to take a good photo of this: 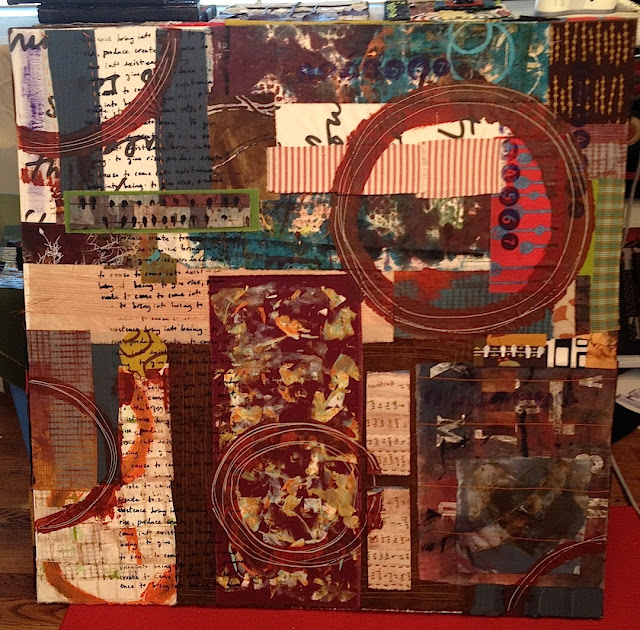 incredibly tragic photo by me (hurts to look at, doesn't it??)

Now here is the photo that Eric took: 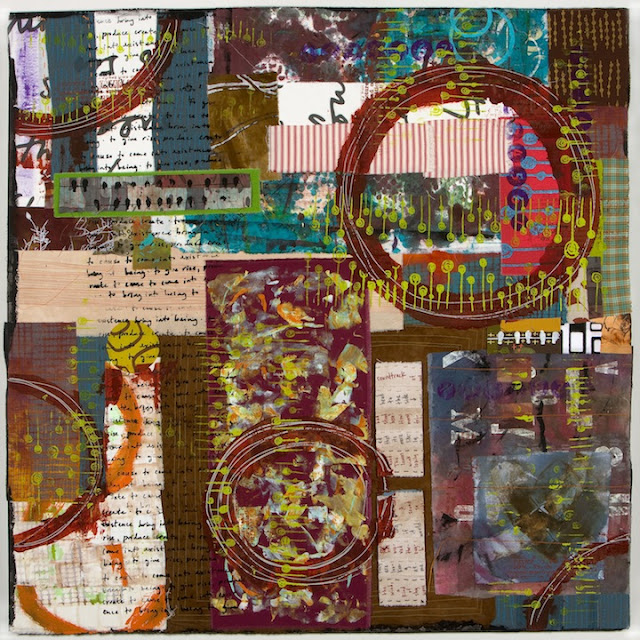 A wee bit better, right? ;-)  Even lighting, clear detail and hung on a wall. Everything I had hoped for.

The photography issue was reason #451 on my list of why I didn't want to work larger. I can cross that off now. Now I want to keep working big, see how far I can push things, really make myself incredibly insane with trying to tame a giant beast.

Not having to worry about the photography thing anymore is going to free up that hesitation, guess I never really realized it bugged me that much.

Here's another new collage, this photo is also by Eric. (I can't bear to show you the one I took, the yellow strips on it made my camera laugh hysterically and produce an absolute hideous photo): 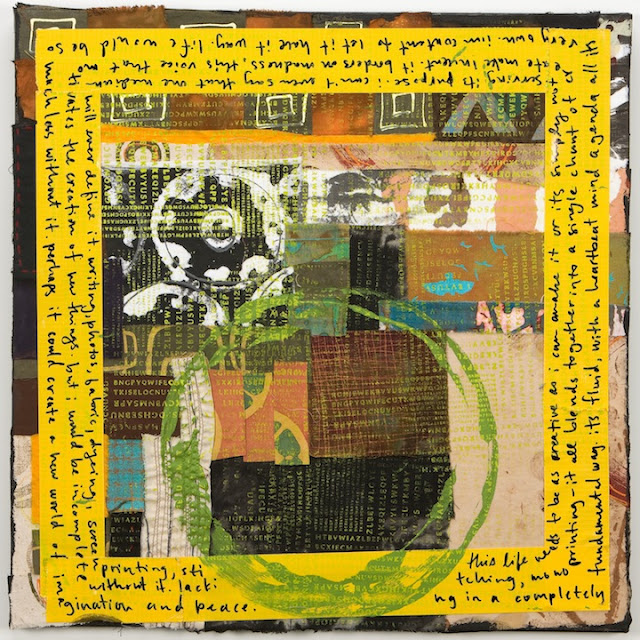 I have a strange affection for this collage. I like all of them but for whatever reason, this one makes me smile. :)

I need to update my website, pull down all the old work that isn't relevant anymore (or that has been cut up into collages) and get my current work up there, with larger images. Now that I've got good shots, it'll be cake. :) (Can't quit smiling about it...)

Posted by Fibra Artysta at 7:30 AM

Glad you found the right photographer. These photos (and the artwork!!) are great.

Years ago, I had a local, professional photographer do my large quilts. She has since moved on. I have since done my own photos. I want to have my new pieces done professionally, yet I don't really have the money. Then I tell myself I can't afford to have them NOT professionally photographed. It's a vicious circle!!

Wow, I love your collages! And the photography is great. Can you tell us an approximate price range for having a professional photo taken?

Wow. What a difference! A good lesson on sticking to what you do best and letting others do what they do best.

Lynn. Thanks so much for sharing. The difference is amazing and when it comes time for me to add fiber art to etsy and my web site, I definitely will go pro. what an advantage that he is very close to me.

Interesting post... the photo differences are easily seen. Now get in there and go big.

I don't have a good photographer near me. I paid one once and his photo was no better than mine. Then I got advice from a photography teacher about how to get rid of hues given off by the surrounding light. Find in your camera's manual the paragraphs about White Balance. You go to that part of the menu on your camera settings and then take a photo of a blank piece of white paper. Then all the photos you take after that will have their true colors show up. It works every time.

I can get the colors to be accurate when I photograph my quilts. What I have a problem with is the focus. I have my quilt hanging on a wall, I have my camera on a tripod, I use a 12 second delay for the shutter, but the photo is always a little out of focus when I look at a zoomed in view. I get the exact same amount out of focus with 2 different cameras. I set the resolution about 2100 pixels on the longest side. The photo looks sharply focussed until I look at a zoomed in view. The photo is good enough to send in to enter a show or competition, but not quite good enough for someone to publish in a book. Any advice out there?

I'm lovin your new work! (well, your old work too)
What a difference in the photos!

Lynn, That is amazing the difference. I love your work but now even love it more!

Lynn, I LOVE these pieces and the photography makes such a beautiful difference!!